Yeah, yeah, so I started this blog with delusions of grandeur and the hope that I'd get off my ass frequently enough to post at least once every week or two. Funny how life gets in the way. Expect some new posts soon(ish)!

In the meantime, here is a picture of two corgis on a dinosaur. Possibly the most compelling photo ever taken. 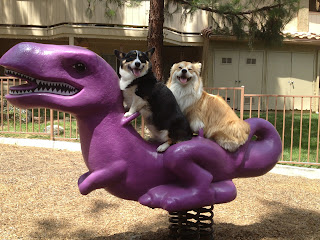 Until next time!
-M

Alright, so last weekend was the wedding, where I got to show off the finished cake. Each tier was gluten-free, using the cake mix I was experimenting with previously. The top was vanilla with jam filling (homemade chokecherry jam courtesy of my mum), the middle was marble cake with chocolate filling, and the bottom was dark chocolate with vanilla filling.

I'm still not entirely happy with the results, but most of that is due to being overly critical of myself. The bride and groom were happy (my cousin is the most laid-back, anti-bridezilla I have EVER met and I will forever adore her for it), the guests drunkenly devoured the cake, and all was well in the world. Here's a picture! 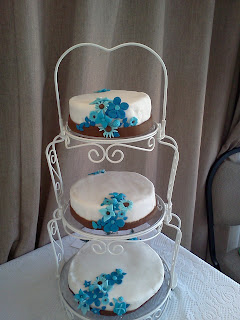 Posted by Marisa at 7:49 PM No comments:

What is a flaugnarde, you ask? If you've ever heard of its cherry-studded partner, clafoutis, it's essentially the same thing but made with different fruit. It's a hybrid of cake, custard, and Yorkshire pudding, baked in a cast iron pan until puffed and golden brown.

This recipe is going to deviate slightly from the others, in that I'm going to make it on the barbecue. Nobody is quite sure when clafoutis/flaugnarde was first made, but it hails from Occitania, a region of Europe that is mostly in southern France but also spreads into parts of Italy and Spain. It is the homeland of many historical greats such as Eleanor of Aquitaine, Jean-François Champollion, and Henri de Toulouse-Latrec, as well as being the land of the medieval troubadours, wandering minstrels espousing courtly love and chivalry.

Lots of courtly love happening at this feast!

Occitan cuisine has a definite Middle Ages feel to it, and while the origins of flaugnarde are unknown, it's a safe bet that people were making something similar many centuries ago. This is the reason I'm making it in a big heavy iron pan and cooking it over a fire. Granted, I'm using propane instead of wood, but fire regulations don't allow me to build a wood-fired brick oven on the balcony!

ANYWAY. This flaugnarde uses nectarines and raspberries, with a batter containing buttermilk, so it should be lightly sweet with a little bit of tartness to it. If you don't have a barbecue, this can easily be done in an oven.

- Preheat the barbecue to about 400 degrees Fahrenheit, and place a large cast-iron skillet on the grill to heat as well.
- Toss the fruit with the lemon juice and set aside.
- Combine the remaining ingredients into a smooth batter, and let rest for 5-10 minutes. 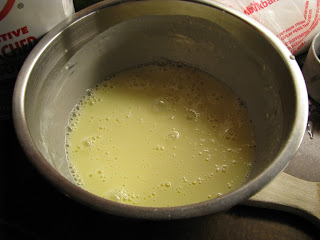 - Once the barbecue is fully heated, place the butter into the hot pan and swirl to coat the bottom and sides.
- Add about half the fruit to the pan, then pour the batter over top and sprinkle with the remaining fruit. 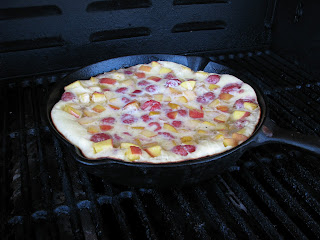 - Turn down the heat to low, and bake until puffy and golden brown, about 30 minutes (if you're doing this in the oven instead, keep it at the same temperature, it won't burn like it would on the barbecue). A toothpick inserted in the center should come out clean.
- Let rest for 10 minutes, then sprinkle with powdered sugar. 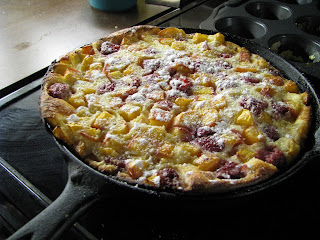 - Cut into wedges and serve.

OKAY. Pretty straightforward, right? So here's where this went wrong: the serving stage. I had this beautiful, fluffy flaugnarde ready to serve, then decided "hey, why don't I turn this out onto a nice serving plate?" Aaaannd it collapsed into a heap. Thankfully it was still incredibly delicious, but if you're making this, keep it in the skillet for serving. 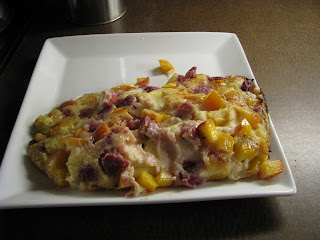 Until next time,
-M

Can we all agree that the most cringe-inducing word ever to be applied to food is "slurry"?

As in, "The fish are deboned and processed into a slurry". 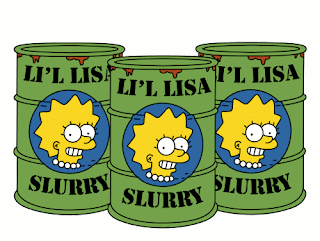 Posted by Marisa at 6:00 PM No comments: 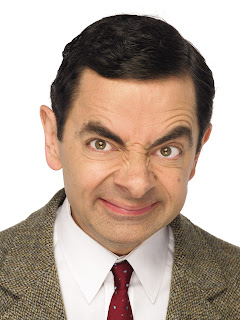 Not this kind of bean.

Ah, the humble bean. Easy to grow, cheap to purchase, efficient at causing flatulence. Aside from the latter, beans are one of the best things to cook. They have lots of fiber and protein, and are versatile as all heck.

Sure, you COULD buy canned, pre-cooked beans. Dried beans, however, are at least half the cost and require minimal effort to prepare. That's not to say canned beans aren't useful, though...sometimes you need insta-beans, for impromptu nachos or tacos.

Still, if you were to throw a couple handfuls of dried beans into a bowl, cover them with water and leave them to sit overnight, by the time you drag yourself out of bed in the morning you'll have a bowlful of beans that are mere minutes away from being ready to eat.

Next step: boil those beans! Most bean varieties have a toxin in them that will give you serious indigestion if they aren't cooked out. Drain your soaked beans, throw them in a pot with enough fresh water to cover them, and boil for at least ten minutes (soaking, rinsing and boiling the beans will help to reduce their gas-producing effects somewhat, too).

So now you've prepped some beans. Here's my vegetarian chili recipe...it has as many veggies crammed into it as possible. Meaty chili is a project for another day, this is cheap and tasty and edible for everyone!

THE WET STUFF:
2 large cans of tomatoes, chopped
A bottle of your favourite beer (dark beers like stout or porter are perfect for this)
3 tbsp tomato paste
1/2 cup ketchup
Juice of 1 lime (or 2 tbsp vinegar)
Canned chipotle peppers, finely diced (if you can't find these, just add more spices, or use chipotle chili powder if you can find it)
Your favourite hot sauce, to taste

Alright. First off, the day before you plan on making chili, throw the beans into a big bowl or container and cover with the water.

The next day, drain and rinse the beans and pour them into a pot with enough water to cover them. Bring to a boil and cook for about 10-15 minutes until they've softened up slightly. Drain and set aside.

In a large stock pot, add a little bit of cooking oil and bring to medium-high heat. Add all the vegetables except the sweet potato, zucchini and corn. Saute until the vegetables begin to soften up.

Add in the beans and the spices, and cook, stirring often, for another minute or two. Then add the wet stuff and reduce the heat to medium-low.

Simmer for at least 45 minutes to 1 hour, stirring occasionally and tasting often (add more spices if desired, and keep tasting the chili until you're satisfied with the flavour). Once the beans are cooked to your liking, add in the remaining vegetables and simmer until they're fully cooked.

Top with sour cream and shredded cheese if desired, and enjoy!

Keep an eye out for more bean recipes...trust me, there will be many more!

Posted by Marisa at 2:40 PM No comments:

Alright, so I got my hands on some gluten-free cake mix from the bulk food store. Before I make the wedding cake, I figured it made sense to do a few test runs. The boyfriend and my co-workers agreed to be my test subjects, so today I'm baking chocolate cupcakes.

Normally, cupcakes (and cake in general) are on my list of foods that get a resounding "meh" from me. Don't get me wrong, I like sweets, but anything cake-based just doesn't do it for me. Give me a pie, or a cheesecake, and I'll happily dive in face-first. Cutesy cupcakes, or those nauseatingly sweet cake pops, will never be as satisfying to me as a slice of lemon meringue pie.

ANYWAY. So I decided to bake cupcakes, because despite my opinions on the matter, the rest of the world seems to like the damn things.

A quick whiz through the mixer resulted in a smooth batter that was unbelievably sticky. I assume that has to do with the tapioca and xanthan gum. I poured it into a non-stick muffin pan that was greased up with some butter, because I didn't have any frilly cupcake liner things. Getting the batter into the cups was a challenge, and as you can see from the picture it was a bit of a mess. OH WELL, that's the dishwasher's problem, not mine. 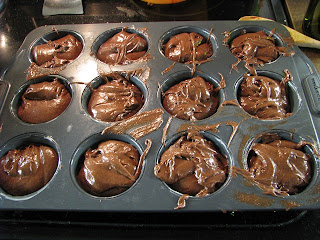 Approximately twenty minutes later, I checked on the cupcakes as they were baking. They had pretty much doubled in size and looked like giant chocolatey mushrooms, which was promising. While they were in the oven, I contemplated the frosting over a glass of whiskey. 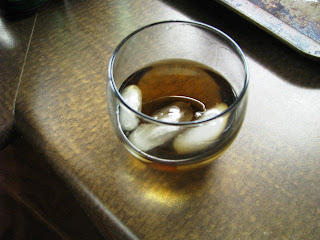 It's alarming how often liquor is a factor in my decision-making.

I decided that a coffee-flavoured frosting would be great for these cupcakes, since I'd be taking them to a morning meeting full of caffeine fiends.

The cupcakes came out of the oven after about 35 minutes, and I let them sit for about 5 minutes before popping them out of the pan. After lifting out of the pan without the slightest resistance (a moment I was NOT expecting), I proclaimed myself a culinary sorceress and put them on a rack to cool off. 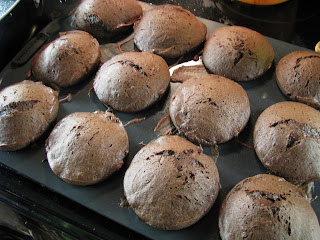 Next, I whipped up a quick batch of frosting (use your favourite recipe- I frequently just make things up as I go along so I can't recall specific measurements), substituting strong coffee for the liquid and adding about a 1/2 cup of melted chocolate. 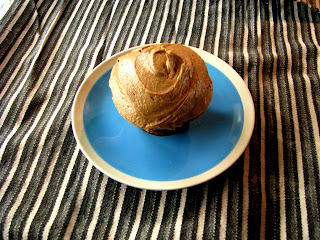 That's a cupcake, all right.

I foisted one of these onto my ever-willing partner, and he proclaimed them as tasty. SUCCESS!

Science Project #1: Wedding Cake, plus some ramblings about gluten.

So I've been asked to bake the cake for my cousin's upcoming wedding. I've made dozens of fancy-ass cakes before, including a Super Mario-themed wedding cake a couple years ago for a friend of mine (which was easily one of the most stressful culinary projects I've ever embarked upon).

However, this is going to be a first on two levels: A) it's going to be a very traditional 3-tiered cake with flowers and royal icing and all that, and B) it must be gluten-free. This second part is much more of a challenge, as my experiences so far with gluten-free baking have yielded mixed results.

One of my coworkers has a gluten intolerance, so I've brought in various gluten-free treats that have passed the taste-test. I wasn't entirely satisfied with the results myself, but I'm a harsh critic of my own work.

Over the next few weeks I'll be experimenting with gluten-free cakes, and documenting the results. Luckily I've got plenty of people who heard about this project and immediately asked (er, demanded) to be guinea pigs, so I'm not gonna end up with a fridge full of cake.

Stay tuned- next up will be a trip to the bulk food store to scope out ingredients!

Marisa
I like food, history, squirrels and beer, among other things.